This project is a collaboration between the artist Thomas Eller and the architect Thomas Hillig and a cross of two approaches. It is art as architecture fusing pictorial and architectural notions of space and time.

On the façade, in the lobby and staircases, as well as in the building’s backyard, one finds image information inscribed in the actual spatial reality of the building. This relatively small residential building in Berlin’s landmarked district Mitte has seven floors and 12 units. Despite the location’s limiting city regulations, no large glass surfaces, no balconies, limited color range, etc., the artist/architect team was able to convince the building authorities of this innovative design approach.

The project perhaps could have never been done without the digitization of the two disciplines. On the click of a mouse one can create Images in almost unlimited sizes. On the click of a mouse maps in a scale of 1:1 can be drafted, making the baroque dream of a life-size map possible, as described by Jorge Luis Borges in “On
Exactitude in Science”.

Virtual space allows us to work on and keep a record of the largest of objects in the smallest of places, as well as the smallest may be presented as large. This can be communicated in real-time across continents, short-cutting space and time with programs like skype, thus creating radically new notions of reality. Also large-scale images are more and more encroaching on the urban landscape, not only in the form of advertisement, but also as temporary installations. Who hasn’t seen an image of a building on a poster while the building behind it is been restored. In other words, digitization forces us to renegotiate not only notions of space and time, but also of pictorial and architectural notions of space.

The artist/architect team worked together closely during the design process of the building, making THE house not an art-and-architecture, but an art-AS-architecture project. The image information is embossed into the surface of the building, creating multiple layers that present various earlier stages of the building’s design
process as a pixel matrix. Conflating time (of the design process) and space (of the façade’s surface), the image is worked into the building’s exterior insulation as a relief structure. Three different layers are “embossed” into the insulation with the pixel matrix hand-painted onto it. The matrix is continued as a print on the balconies’ glass sheets’ exterior to give them a matte surface, so as to comply with city regulations on the one hand, but also to give the building a more unified surface.

The result of the artist/architecture collaboration is, despite its cyber-real approach, maybe not surprisingly close to baroque notions of architecture, where “real” and “fake” architectural elements work hand in hand to create very complex spatial realities. Gilles Deleuze, in his book “The Fold”, writes about these as a negotiation
of a baroque building’s interior and exterior spaces, the transition from public to private and more private spaces as a folded-in reality of inter-woven spaces. (This is also the reason why the building authorities could be convinced. The neighboring buildings mostly lack the neo-baroque ornamentation of the windows that otherwise dominates the urban landscape of Berlin. Finding a contemporary solution beyond the window-as-hole approach was welcomed enthusiastically.)

The surfaces of THE house may have descended from a radical different origin, but show the same de-limiting effect as many baroque architectural designs do. The pervasiveness, not of a metaphysical space, as was intended during baroque times, but of an almost absolute pervasiveness of the digital realm that we are experiencing in all aspects of life today (work, privacy, etc…) manifests itself in Eller’s and Hillig’s novel approach to art as architecture. 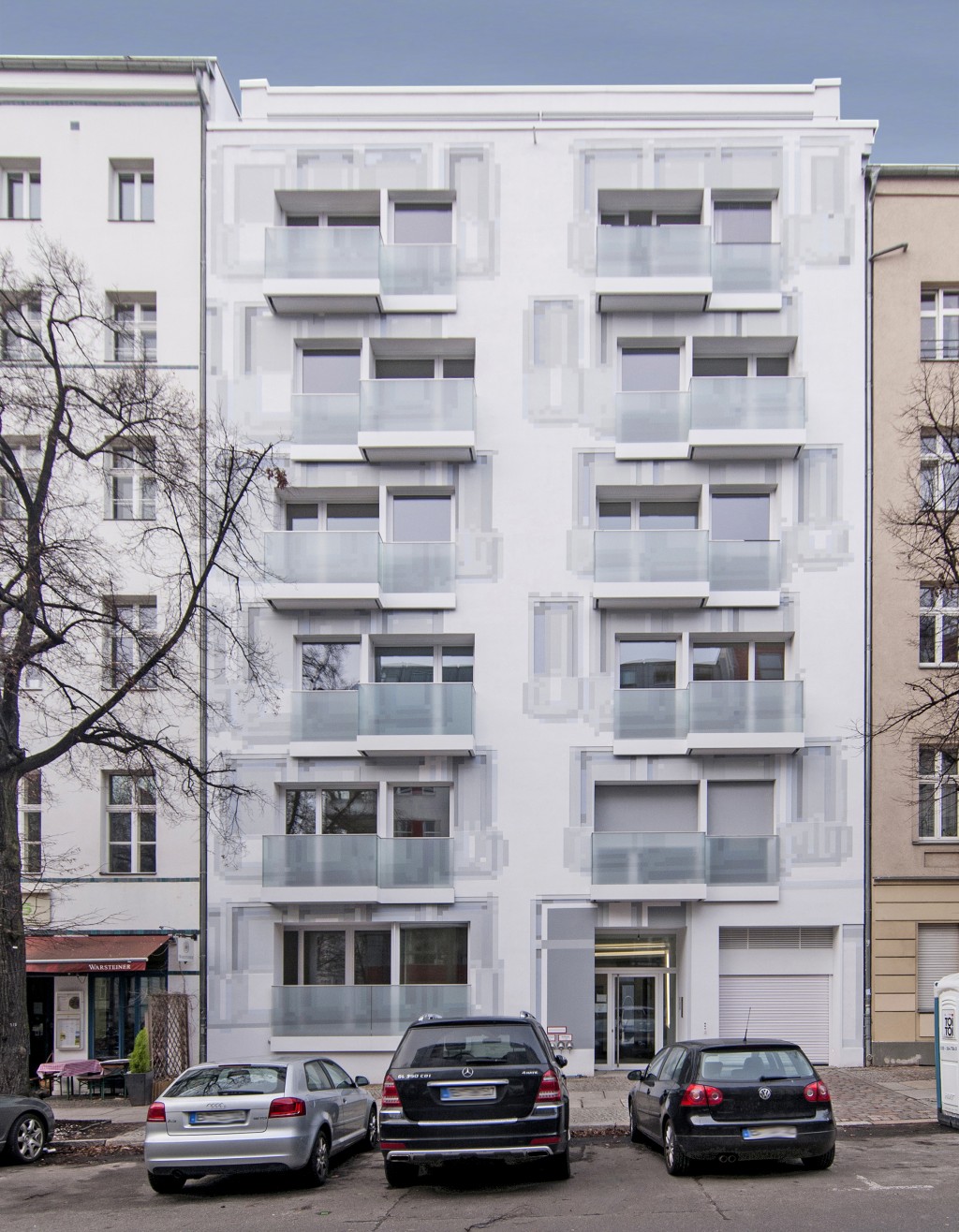 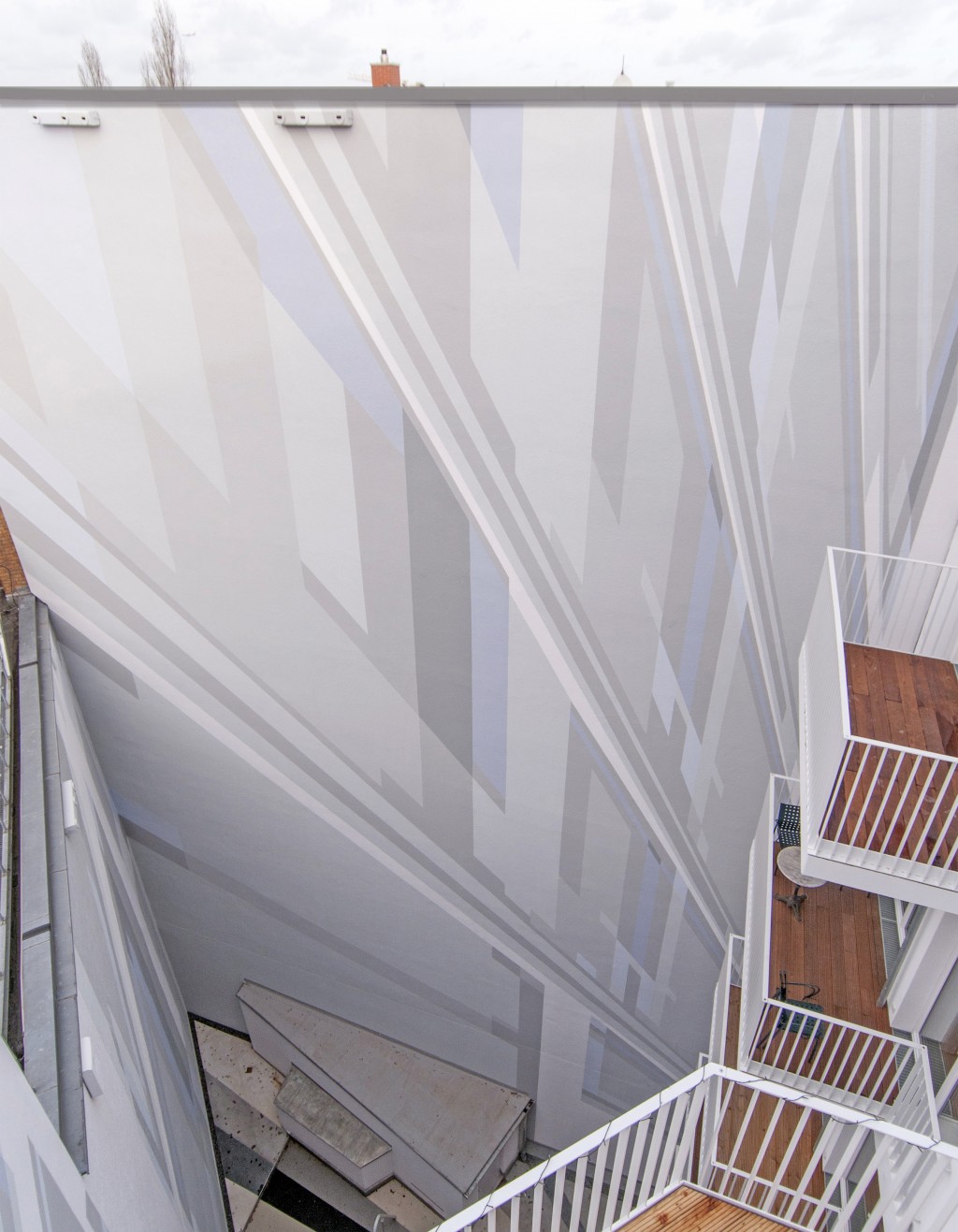 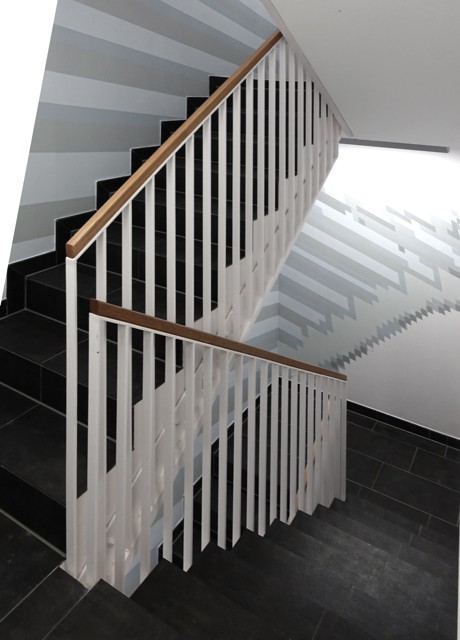