For his first exhibition with Hošek Contemporary, German artist Johannes Mundinger is revealing a contrasting mixed media installation for Sichtfeld – field of view in English. After a month-long art residency on board MS Heimatland, Mundinger is sharing the results of his research on national state symbols, with a particular focus on flags. Working with fabric, paint and glass, he provides us with a perspective on the redundancy of such objects and their incomprehensible value.

Drawing inspiration from growing concerns over the rise of nationalism and right-wing parties in the recent years, Sichtfeld can be understood as an expression of his frustration and disdain towards tightening borders, a sentiment shared by many. In such context, flags held high not only indicate a nationalist ideology, but they also represent another tool for excluding others, reminding instead how one does not belong.

The flag and its symbolism reflect an abstract system, where the narrative is created through colours and shapes charged with meaning, acting as anchors for the disoriented and holding value through fictional stories of our collective identities. Reflecting a dissatisfaction with the national and traditional symbolism of flags, Mundinger is taking a stance by cutting them into shreds before randomly sewing the pieces back together. Consequently, in Sichtfeld the flags lose their purpose and cease to have a meaning, becoming mere mosaics or abstract fabric paintings.

At the centre of the gallery, the mirror flag created with mundane objects reflects the world as we know it, inviting us to observe our own identity and those surrounding us. Mundinger points out the absurdity of defined characteristics and stereotypes linked to certain nationalities, presumably recognisable through a variety of national symbols. By deconstructing conventional flags, he seems to invent a system of symbols or a language devoid of prejudice and expectations, thus welcoming viewers to a temporary space without artificial borders. 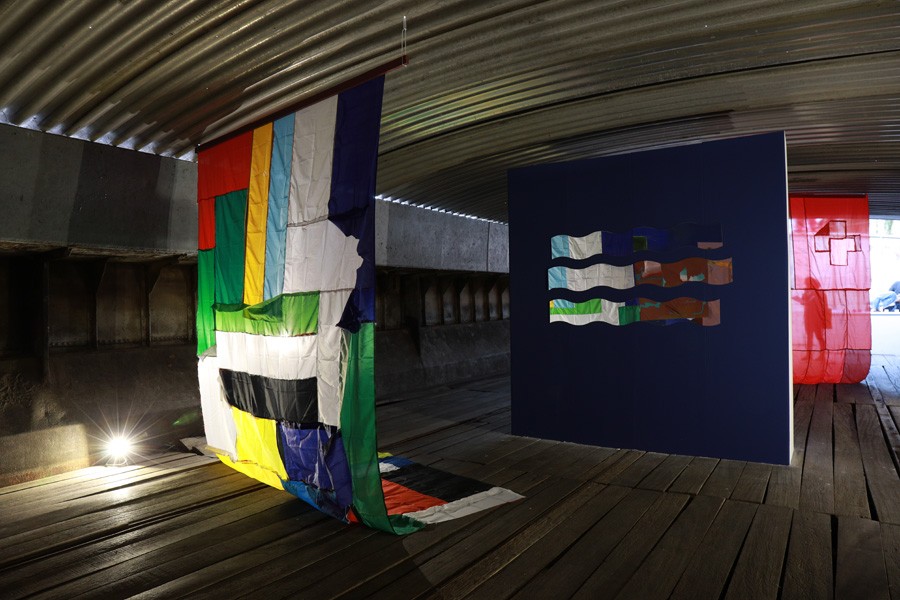