Competition
Contract awarded by the District Authority of Pankow. Five artists were invited to participate.

On a lot at Winsstr 49-50 in Prenzlauerberg, the District Authority of Pankow planned to build a sports complex. The design concepts were to be situated between light installations and kinetic sculptures. Starting from the function of the building as a sport and recreation facility, the design was to deal with the theme of “movement”.

Echoing the rhythm of the stairs, a stripe of blue lights is mounted parallel to the stairs along the edges of the elevator shaft.

The movement of a person into the entrance hall causes the lines of light to begin moving: with each new visitor who comes into the hall, the light flashes up to the roof and back down again, where it waits for the next.

Realization
The work was created in 2005. 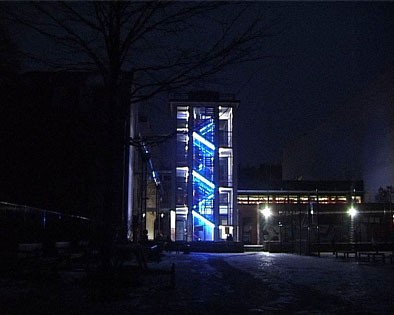