This project was done in Ciutat Vella, a centric neighboourhood in Barcelona and it has its starting point in the exploration of the memory and its meaning in the context of a very centric neighbourhood, transformated in the recent years by inmigration and tourism.
Through doing some interviews we found out that there was a project of remodelation, in a square, la Plaça Jaume Sabartes, as a project that has ist origin in a desire to extend the Museo Picasso.
This urbanistic planning that began in 1996 with the expropiation of the buildings that were in that square is still affecting the neighbours, with such a long process that for many of them is difficult to keep track.
We decided then to present in an intervention of 24 hours, the recent memory of the buildings that were expropiated, with the names of the families that lived in those buildings, marking on the floor the plans of the houses and adjudicating them the names of the families who inhabitated them, through maps we found in the City Hall and through the testimony of some of the old neighbours that stayed in the neighbourhood after the expropiation.
In the afternoon of that same day and after marking the recent memory we design in the floor the new plan appoved by the City Hall and after we finalized it we talk to the neighbours and public in general presentinfg them with an opportunity to write, draw, or be recorded giving ideas for the new plan in the plaza.
All this information was published in the web as part of the III International Games of Efimeral Art in Barcelona and publihed in Argentina, Brasil, Colombia, Italia and Spain.

The following images showed the public interventation realized in Barcelona. The project it was divided in three parts.
The first part it was realized in the morning and the whole square was marked with white tape, drawing the old buildings that were expropiated in 1996 and writing the names of the familes who used to live on them as well as details of the interior given by old neighbours.
The second part of the project was marked with yellow (simbolizing, benches and chairs) and green lines (simbolizing trees). This was the new plan of the City Hall. By the end we have the two plans overimposed.
Finally we set up a table in which we exhibit the new project to the neighbours given them the oportunity to participate through drawing or talking to us in the design of the future of the square. Finally we put together a table in which we exhibited the model for the new City Hall’s and we gave a chance to the public and neighbours to give their opinion and to partipate on the design of the new project, through writting, drawing or talking to the cameras. 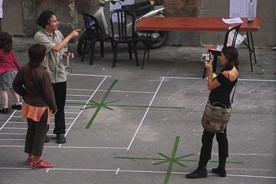