For a Trans-historic narrative of Modernity

A variation of three large ocean waves of the tsunami type (but not a triptych), 2019. The silkscreened plates on the back, balance in an illusionist manner on columns ready to collapse.

This concrete work questions the representation in the broadest sense. Its crystallizing all levels relative to the interpretation of nature in the history of civilization and art (an archive). The archetypal theme of the wave goes back to the origins of mankind and today to contemporary issues. A Memento Mori.

Landscape painting always had the function of showing the state of things. How one has positioned oneself in front of progress and development in every epoch of history. William Turner is a good example in the representation of the transition state…

1. The waves. In collaboration with two photographers from Brittany, Mathieu Rivrin and Jean Guichard. Helicopter shots above the Atlantic, in Finistère (FR. 29) at the height of Nividic lighthouse (Ouessant). A wave casting during two different storms, tempête Fionn in 2018 and tempête Ruzica in 2016.

2. The three stair railings : end of the 19th century, origin Berlin, Wilhelminian style (Gründerzeit), provenance “Mietkaserne”. Patina, color, texture, scratches are intentionally left in their original condition. Time and Reality or the different materials and their historical eloquence are used as artistic vocabulary.

(This period Gründerzeit, is described as the economic boom marks in the concept of industrial development and mass production in all areas. The beginning of economic liberalism and speculation, or the beginning of the modern world as we know it. After the views of scientists, the visible climate changes exactly at that moment). 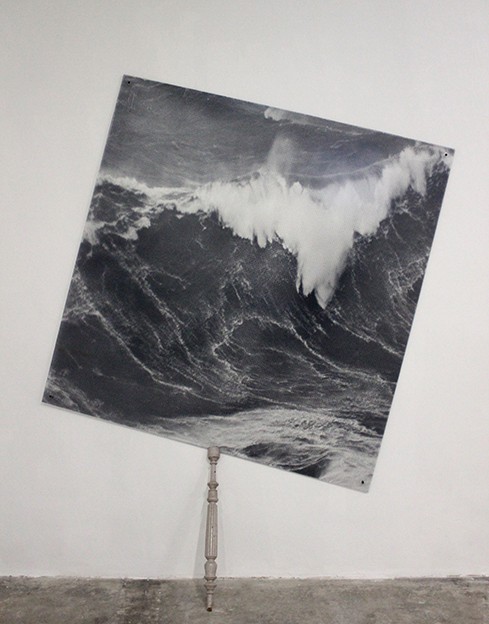